Minutemen make mark in a big way – Track & Field does it again! 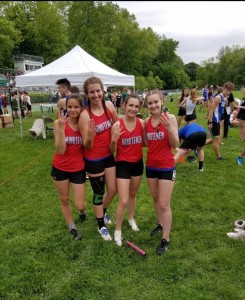 There was a ton of pressure on Mill River’s 4X100 girls relay team at Saturday’s Division III State Track & Field Meet in Windsor and it wasn’t all tied to their No. 1 seed.

The Minutemen had a tradition to uphold and that was important to them. Mill River had
won the event the previous three years.

It was pressure but it was also motivation.

“We wanted to win it for our past relay teams,” Hannah Anderson said.

Suzie Petrossi, Olivia Suker, Julia Deppert and Anderson did win it, and with all four returning next year, they will take aim at a fifth consecutive state crown in 2020.

The Mill River relay unit clocked 52.84 seconds to the 54.14 turned in by second-place Vergennes.

“They know about the tradition in the event that we have started here and they take that responsibility very seriously. They are very dedicated,” Mill River coach Kell Giffin said.

Deppert has a family tradition to uphold as well. Her older sister Amanda Deppert was a part of three of the titles.

Anderson said they realized the No. 1 seed they had earned going into the event guaranteed nothing.

“We knew going into the day that we had to stay focused,” she said.

There are stories in the annals of Vermont high school track and field of outstanding relay teams losing an event because of poor execution on the exchange. Dropped batons have meant broken dreams.

It is a technique the Minutemen take very seriously.

“We were missing some girls in our first meet and our handoffs were so bad,” Petrossi said. “We practiced our handoffs for 10 or 15 minutes before each race after that.”

They knew everyone was gunning for them as the top seed.

“There were other teams that really wanted it but we wanted it more,” Deppert said.

But the Minutemen’s fourth straight title in that relay was only one slice of a banner day for Mill River. 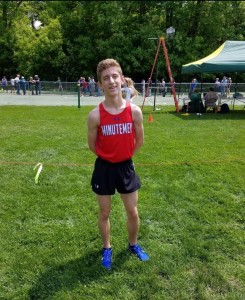 Brogan Giffin became a double state champion, winning the boys 1500 and 3000 meters, and Annika Heintz made a big splash as a freshman, bringing home a state championship in the 3000 meters.

Giffin, a sophomore, felt he had a good shot in the races but had a very different strategy in each.

Giffin and Heintz, both Marble Valley League cross country champions, believe there is beneficial transfer from their fall sport to track and field. 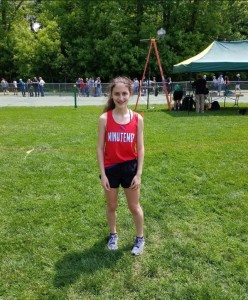 But at Essex she took a gigantic step, earning the No. 1 seed for the D-III meet.

That was added pressure, she said, putting the bullseye on her back.

“As the fourth seed, I wasn’t really a threat,” Heintz said. “Being the top seed was very stressful.”

She had extra pressure, but coach Giffin also believes it gave her a jolt of confidence.

Her main competition in the division was Thetford’s Eloise Van Meter.

“She is an amazing runner,” Heintz said of her adversary.

Saturday, Heintz found it within herself to get to the finish line before Van Meter and every other Division III runner by clocking 11:52.40 to Van Meter’s 12:01.62.

Coach Giffin is excited that Heintz has three years ahead of her with the Minutemen.

“She has a ton of potential,” he said. “I had been tracking her in middle school.

“I had no doubt about her running but she didn’t know how to race — the strategy. It was great seeing her get it each week.”

The coach put it on the line for Heintz on the big day in Windsor.

“I told her, ‘We aren’t here for a PR (personal record), we are here to win,” Giffin said.

“I talked to my coach beforehand a lot,” Heintz said. “He wanted me to run my race. I knew that I couldn’t go out too fast. I kind of kept with the pack and then on the fourth or fifth lap (in a seven-lap race) I started to push the pace.”

It was gratifying to coach Giffin to see Heintz process that strategy and then make it pay off. It signaled her growth as a runner.

There is no track facility at Mill River, so Giffin tries to get his athletes to Rutland High School’s eight-lane track twice a week for practice.

“The Rutland coaches are great about it,” Giffin said. “Sometimes it is challenging to coordinate it.

Giffin feels it is important to get his athletes on the track those days. He would love for Mill River to have its own track and said it has been discussed.

“I think there might even be blueprints, but the issue is money. I don’t know how feasible it is, but we make do.”

The days the Minutemen do not get to Rutland, they use the spacious campus of Mill River to train.

Brogan Giffin, all of the relay team and Heintz return to give the Minutemen a nice nucleus to build on next year along with the other returners.

They are committed to the sport and to the off-season training that goes with it.

Giffin said he will take a break until July and then start running again. He also attends the Green Mountain Nike running camp on the 1,300-acre campus of Kimball Union Academy in Meriden, New Hampshire, during July, an experience he finds very helpful.

First, Giffin will be competing at the New England Interscholastic Meet at Thornton Academy in Maine.

“I am going to go to my coach to get a plan for the summer,” Heintz said.

Coach Giffin can be a valuable resource in that regard. He was an elite runner on the NCAA Division I level at the University of Louisville.

“I think a lot of it will be about building up the mileage and doing some hills,” Heintz said.

Petrossi, Anderson and Deppert play on the Mill River soccer team in the fall.

It was a rewarding day at Windsor’s Murphy-Morse Track Complex for the Minutemen, but the most exciting times might be ahead for the Mill River track and field program.

The Mill River Podcast: School is in Session. Right?
Connecting Mill River Schools educators with each other and the broader community, during Coronavirus and beyond.
Acknowledging. Talking.
by Dave Younce

This episode highlights Ronnie Holcomb and Brad Rideout, two black men who work with me in the Mill River Schools. Brad and Ronnie help to shed light on today’s world by being vulnerable, candid and open about their life experiences. This conversation, intended to be the first of many, focuses on their perspectives. There’s a lot to learn. It’s time for us to listen.