If there is one thing Shawn Bendig loves as much as the lush green of a fairway, it is the surface of the soccer pitch. Now, he has both.

He had hop scotched through corporate America, landing at various jobs in Ohio and Connecticut.

Like many, he tired of the rat race of the corporate world and began longing for the pastoral beauty and pace of life he remembered back in Vermont.

A few years ago, he saw an opportunity in the Stonehedge Par 3 Golf Course on Squire Road in North Clarendon and at Stonehedge Indoor Golf on Route 7 in Rutland. It could be his opportunity to escape the corporate scene he had begun to dislike so much. 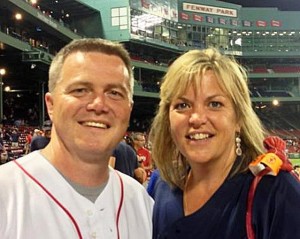 Shawn Bendig and his wife Ginger. Both are Mill River graduates.

He tried to fill the void the last couple of years by officiating high school soccer in Vermont.

“I enjoyed it but the more I reffed, the more I missed being with the kids on the sideline,” Bendig said.

Then, came the phone call from Mill River Athletic Director Kim Maniery informing him of the vacancy created by veteran coach Dave Carr’s departure. Carr will still be around, coaching the Mill River middle school program.

“Dave was very gracious. He called me today and offered his congratulations and any help I might need,” Bendig said.

It has been a large life’s arc back home to Mill River after graduating from Clarkson University. He spent six years in Ohio and then many more in Connecticut, using his engineering degree.

That was fine for a time.

“I got tired of the corporate nonsense,” Bendig said.

Moving back home a few years ago and working at the golf course, Bendig found he was having fun.

“I had a blast. I thought if I could ever make that work…” he said. “I had to take a step back from the rat race.”

Now, he and his wife Ginger are settled in back where they started. She is a fifth grade teacher at Rutland Intermediate School.

Adding the MRU soccer job completes the picture in a perfect way, he said.

Back coaching at the same school where he played the game for coach Jack Fillioe, Bendig can’t wait for that first day of practice on Aug. 15.

He will meet with the players next week and work with them over the summer to the extent that he can so when the first formal practices arrive, he will at least know the names.

He has ideas about the way he wants his team to play the game, but the style of play will be dictated by his personnel to a large extent, he said.

“I am not big on wins and losses,” Bendig said.

“I want players who are strong on the ball and technically minded.

“I want a team with a high work rate. At this level, that is critical. You can’t be outworked.

“I love to play a Flat 4 in the back. I love to have smart defenders. But all of that will depend upon the personnel.”

Most of all, he wants his players to have a rewarding experience.

He was perusing a schedule that Maniery had sent him on Thursday and noticed the preseason scrimmages were already in place. They will be against Green Mountain and Proctor.

The Minutemen drop down from Division II to Division III this season, but the schedule is still sprinkled with Division I and II teams like Rutland, Burr and Burton Academy and Hartford.

“Those are teams I saw officiating and they are sound technically,” Bendig said.

“We are excited to have him,” Maniery said.

Not nearly as excited as Bendig is to be here, far from the rat race and back in the game he loves.